Reported by Christie Chu at Artnet News: To celebrate New York Fashion Week, let’s a look at the increasingly intertwined worlds of art and fashion. Nowadays, art plays the muse while fashion gives it a different kind of exposure.

Over the last century artists and their artworks have become a popular source of inspiration for designers’ collections, and in return, through fashion, art has become more widely available—at least in terms of its price—to the public. In the 1960s Yves Saint Laurent crafted the iconic “Mondrian” day dress.

After Jacobs and Murakami cemented LV as the most artful leather goods brand, it seemed as if the label had perfected the art-fashion crossover formula. The introduction of Kusama’s collection for Louis Vuitton also coincided with the launch of her retrospective at the Whitney Museum. Books were published, parties were thrown, handbags were pre-ordered, and demand for Kusama’s works was higher than ever.

On a much smaller scale, creative director Hedi Slimane—who in the past three years has spearheaded the total transformation of Yves Saint Laurent—received permission from California conceptual artist John Baldessari to reinterpret three of his paintings for his Fall 2014 collection. The results of the YSL-Baldessari collaboration are uniquely exclusive. The three dress designs, which will be sold in an extremely limited quantity of 10 each, were all hand-embroidered; one of each will live in the Baldessari archive, while the others will be scattered across YSL flagship stores worldwide.

Not to be outdone, Raf Simons—who is often compared to Slimane for the clear influence of punk and youth culture in their respective designs—collaborated with artist Sterling Ruby for his Fall 2014 men’s collection on his eponymous label. Slimane and Simons’s choices of artist are hardly arbitrary. Slimane lived in California for many years and the state became the subject of several photography exhibitions in which he was featured. Simons, for his part, has a deep-seated interest in youth movements and urban gangs that has glaring affinities with Ruby’s work. The recent collaborators had been in talks for several years; Ruby described his creation with Simons as a “natural thing to do.”

A look from the Raf Simons-Sterling Ruby Fall 2014

And it’s not just the high-end fashion houses that are collaborating with artists. Uniqlo, which is owned by Japanese retail giant Fast Retailing, partnered with MoMA for SPRZ NY, a collection of graphic T-shirts, shorts, and hoodies featuring artworks by famous artists (see “MoMA Licenses Warhol, Pollock, and Basquiat for Uniqlo’s Newest Fashion Line“). Jean-Michel Basquiat’s primitivist paintings, Keith Haring’s idiosyncratic figure drawings, or Andy Warhol’s Lifesaver-hued Campbell’s soup can screen print can be bought for less than $20—an astronomically lower price point than, say, a real soup can print by Warhol.

At NY Fashion Week, there is no doubt we’ll see art on the catwalk, but is this fashion-art combo just a new way of exploiting artists, consumers, or both? Does it get a pass under the guise of nobly peddling an otherwise unobtainable commodity, art, to the T-shirt-buying masses? Either way, both the artists and the brands are laughing all the way to the bank. 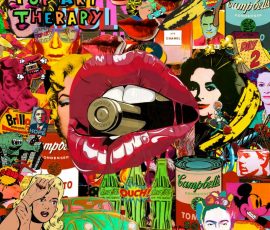 Pop Art Isn’t Just for Warhol
Pop Art took the typical repressed, traditional, fine-art culture and challenged it with elements from the masses. This included things like comic books, soup cans and celebrities all mixed... 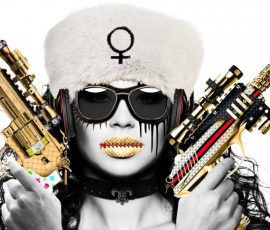 Art Is Like Fashion
From Anna Wintour to Kanye West, the fashion industry is as diverse as it is glamorous. Whether it's Yeezy Season 28 or the crisp pages of Vogue, fashion has...